We have now completed our exhibition "Maailman sarjakuvittajat" (loosely translated: comics makers of the world - also alluding to our organisation's name in Finnish).

The exhibition displays nine Finnish comics artists who have been at our comics workshops in different parts of the world.  Their own comics reflect in different ways their experiences from working with development issues and comics. Each artist has chosen a comic from a workshop, where s/he or has been a trainer. In the exhibition the comics are displayed in pairs, showing one by a Finnish artist and one by a Southern trainee. The exhibition, with Finnish texts, will be shown on comics festivals, in city libraries, and in comics schools in Finland during the year 2014.

The exhibition publication (28 pp) with interviews of the Finnish artists was compiled by Maippi Tapanainen.
Posted by World Comics Finland at 14:04 1 comment:

A remarkable publication from Tara Books in Chennai, India! The story of Martin Luther King’s life and the civil rights struggle in the Sixties in the US, drawn by a Patua artist from Bengal, with lyrical prose by an African-American writer.

Patua scroll art is a longtime storytelling tradition in Bengal. The artist paints a scroll with, typically, 20 to 30 panels and tells or sings the story while showing the panels one at a time. He goes from one village to the next and lives primarily on what he can collect from the villagers. His stories are mainly from the religious and the mythological realm, but also contemporary events can be turned into this art form.

Tara Books commissioned  Patua artist Manu Chitrakar to paint the story of Martin Luther King jr and when it was still in a sketch format they engaged  US writer Arthur Flowers to write the text. The text and the art were combined by  Italian graphic designer Gugliemo Rossi into an enjoyable fusion.

Special thanks go to the Helsinki Library that bought the book for us to read!

Posted by World Comics Finland at 13:34 No comments: 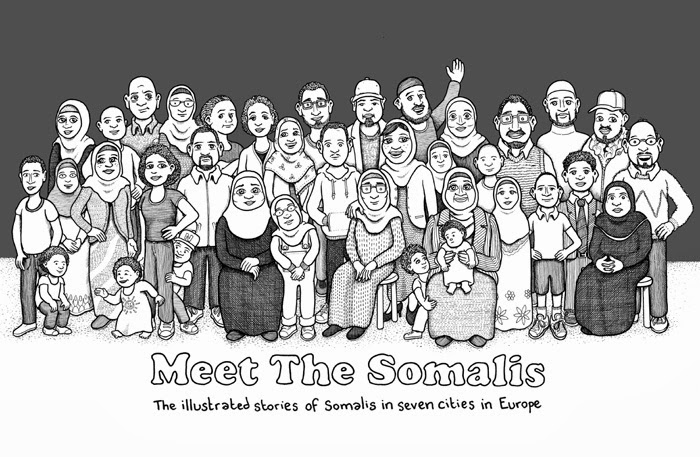 Meet the Somalis is a collection of 14 illustrated stories depicting the real life experiences of Somalis in seven cities in Europe, one of them Helsinki.

The stories focus on challenges faced by Somali migrants in Europe, such as education, housing, media, employment, political participation, and identity. They were told to author Benjamin Dix and made into comics by artist Lindsay Pollock.
Check it out, it's worthwhile, as the 14 stories paint a vivid and obviously quite true picture of what it means to be a Somali in Europe. The publication is available on:
http://www.opensocietyfoundations.org/multimedia/meet-the-somalis


It is also available as a downloadable pdf-file (62 pages).
Posted by World Comics Finland at 15:13 No comments:

Comics as a multicultural tool for teachers

A comics workshop for teachers started in November and will end in January. In all, the participants will have four days of tuition, with a considerable amount of assignments between the tuition days. The idea is that the teachers will run their own comics workshops in their schools. The workshop is arranged by the Tampere Summer University and funded by the Finnish National Board of Education. It is designed to introduce comics as a tool for a multicultural approach to education. Leif Packalen of World Comics Finland and Eila Isotalus of Unidos, are tutors at the course.

We were requested to run comics workshops for the social services students at Laurea University of Applied Sciences, Tikkurila campus, in December. 36 students, in two groups, took part in the workshops. The workshops were a part of their studies in how to use visual means in social services. The students made comics about different social issues, such as student welfare, Christmas shopping craze, loneliness, attitude towards socially marginalized people, etc.

Grassroots comics combined with drama for global education in schools

Nuorten Akatemia (The Finnish Youth Academy) has been running a highly appreciated school visitor programme with grassroots comics since 2009 with support from the Foreign Ministry. In 2013 - 2014 the programme was expanded to include a drama workshop, which will precede the comics workshops in the schools.

Heidi Leino and Leif Packalen ran the comics training workshop for 25 school visitors in Helsinki in December. Heidi also worked as a tutor for the drama part of the workshop.

Posted by World Comics Finland at 18:49 No comments:

Cartoonists Rights Network made a web article about grassroots comics

Cartoonists Rights Network International (CRNI) a worldwide organization, advocates for the protection of human, personal, and creative freedoms of editorial cartoonists around the world.

Cartoonist Daniel Murphy of CRNI visited Helsinki in October and wrote an article about World Comics Finland, which is now available on CRNI's website:

http://www.cartoonistsrights.org/recent_developments_article.php?id=112
Posted by World Comics Finland at 18:28 No comments: