Grassroots Comics were made by immigrants, refugees and Finns in two workshops in the Joensuu area. The workshops took place in October and November 2011 at the multicultural centre Vatakka in Joensuu and at the Kontioniemi reception centre for asylum seekers. Both are run by the Finnish Red Cross. The tutors and organisers of the workshops were artists Sanna Hukkanen and Sunday Mpanduji and the project was funded by Otto A. Malm’s Donation Fund.

The participants of  the Vatakka workshop were mainly Finnish, though a few immigrants participated, too. It was difficult to get immigrants involved.  The participants chose to make their comics about prejudice. They showed strong enthusiasm for comic making, and some of them managed to complete two wallposter comics. The organizers also hoped to get the voices of immigrants heard, so another comics workshop was held in Kontioniemi.

The residents of Kontioniemi centre are quite isolated as it is located far from town. They chose the theme Finland for their comics, but when they started creating their stories, many complained that they had very little experience from Finland. One participant was drawing a tree and stars, and when asked, he explained that it was all he had seen in Finland, “the tree and stars just outside the door”. Some participants made comics about Finnish climate that was new and extreme to them. One commented on the isolated conditions at the reception centre and also told about his background in his comic.

In Kontioniemi there were some language difficulties in teaching, since everybody seemed to speak a different language. Some participants didn’t have any earlier experience of comics, so the whole concept was new to them. Despite the difficulties many wonderful comics were created during the workshop. The participants were happy and proud to get a chance to express themselves through the medium of comics.

The comics made during both workshops were displayed in an exhibition in Vatakka and distributed in the Joensuu area as posters and booklets. Two of the comics were even published in the local newspaper Karjalainen.

Posted by World Comics Finland at 10:21 No comments:

Comics Power to Kenya, enjoy and get inspired!
Posted by World Comics Finland at 11:33 No comments:

We recently received more grassroots comics from APDH (Association pour la Paix et les Droits de L’Homme), our partner organisation in Ngozi, Burundi. The comics have been made in their network of human right clubs.

They take up issues such as land problems, violence against women, right to education, communal harmony, etc.

Below three samples in Kirundi with English and French translations provided by René Claude Niyonkuru, Coordinator of the Comics Project.

Posted by World Comics Finland at 18:51 No comments: 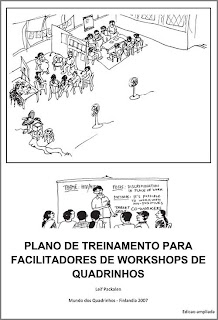 The Portuguese translation of our trainer’s manual, for the use of grassroots comics trainers, is finally available. The trainer’s manual has 40 pages, and it can be downloaded fromhttp://www.worldcomics.fi/pdf/portuguese-workshop-training-plan.pdf

This manual is a step by step guide to how to run a grassroots comics workshop. It should be used together with the basic grassroots comics manual, which is handed out to workshop participants. The basic manual is available on: http://www.worldcomics.fi/pdf/portuguese-wallposter-manual.pdf
Posted by World Comics Finland at 15:21 2 comments:

Inspired by Kaisa Lekas’s Pupäähattu- award (see blogpost entry 15.1.2012) we had a look at other Puupäähattu-awardees within our membership. So, in chronological order:

Tarmo Koivisto, a founding member and Vice-Chairman of World Comics Finland, received the Puupäähattu-award in 1978. He is one of the pioneers of modern comics in Finland. His Mämmilä series, which he started as a strip in 1974, deals with contemporary Finnish life in a small fictive town. His comics comment on issues such as the first African refugees and membership in the European Union. Mämmilä town has numerous colourful characters. Over the years Mämmilä has proved to be one of the most-loved comics in Finland.

Tarmo has been a trainer in several of our workshops in Tanzania and India.

Matti Hagelberg and Katja Tukiainen  have both influenced the comics scene in Finland tremendously. Matti got his Puupäähattu-award in 1997 and Katja hers in 2003. Both have also worked as comics trainers in our workshops in India.

Katja has been a World Comics Finland board member since 2000. Her commitment and creativeness have been great assets to our organisation. To get a full picture of Katja pls check her homepage www.katjat.net.

Matti Hagelberg has produced 18 comic albums and is also widely published abroad. He is a long-time member of World Comics Finland.

Posted by World Comics Finland at 19:38 No comments: