Comics from Inside the Prisons (US)


American activist Lois Ahrens is our long-time pen-pal who has tirelessly worked for the Real Cost of Prisons Project in the U.S.A. We admire her work, and strongly recommend a visit to the project’s website http://www.realcostofprisons.org/ See how comics can be used in mobilizing opinion against an unjust prison system and also how prisoners themselves make comics about their lives.


The Real Cost of Prisons Project seeks to broaden and deepen the organizing capacity of prison/justice activists working to end mass incarceration. The Real Cost of Prisons Project brings together justice activists, artists, justice policy researchers and people directly experiencing the impact of mass incarceration to create popular education materials and other resources which explore the immediate and long-term costs of incarceration on the individual, her/his family, community and the nation.
﻿

Two comic books are available from Real Cost of Prisons Project. The stories and statistical information in each comic book is thoroughly researched and documented. As of February 2010, 125,000 copies of the comic books have been printed and more than 115,000 have been sent to families of people who are incarcerated, people who are incarcerated and to organizers and activists throughout the country. The demand for them is constant and the ways in which they are being used is inspiring.

The books are free to prisoners, organizers against mass incarceration and educators in the U.S., but they cannot be sent free of charge outside the country. However, they are available on-line at http://www.realcostofprisons.org/comics.html

Lois Ahrens has also started something she calls ”Comix from Inside”  http://www.realcostofprisons.org/comix/  These comics are made by women and men who are incarcerated, some of them for life.


﻿
Mondo (www.mondo.org.ee) is one of the few NGOs in Estonia that is active in development cooperation. Mondo has project work in Afghanistan, Ghana, Kenya, and Uganda. Mondo is also in charge of several development education projects in Estonia.

Mondo wanted to replicate in Estonia the successful Finnish global education project run by Nuorten akatemia (Youth Academy) since 2009 in schools. In the project, school visitors run 3-hour comics workshops on such global themes as climate change, fair trade, justice issues, and development advocacy. World Comics Finland has trained the Finnish school visitors in how to conduct workshops in schools, and now we were requested to train their Estonian colleagues.

The two-day workshop was held in early November and was facilitated by Heidi Leino and Leif Packalen from World Comics Finland. For the training, our basic grassroots comics manual was translated into Estonian. It will later be made available on our website.

As always, the participants in the workshop were delighted to learn the method of grassroots comics and they were eager to put their new skills into practice in their own projects. Johanna Helin, Manager for Mondo’s Global Education Centre, described its activities as ”very alternative” in the Estonian society.

A detail from Ivi Sutt’s comic on Estonian migrant labour below: A husband must go to Finland to find work and his children call him "uncle" when he visits Estonia on vacations. At the end of the story he decides to remain home, whatever it takes. 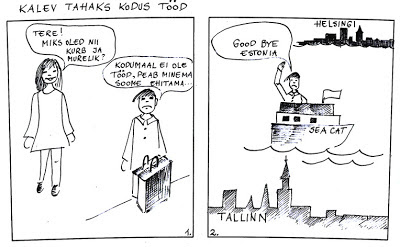 Posted by World Comics Finland at 19:00 No comments:

Comics to engage youth in society


Helsinki City Hall was invaded by 2600 youngsters on UN Day (24.10). The "RuutiExpo"-event was arranged by the Youth Department of the City to promote different ways for the youth to get involved in matters of society. City authorities, political youth organisations, and NGOs participated. There were political discussions, rap workshops, drama studios, info stands etc., and also a grassroots comics workshop, which was led by Hanna Arvela of World Comics Finland. The workshop was arranged jointly with CIMO (the European Youth Exchange organisation).

The comics took up mainly school issues, such as the battle between study time and fun time, pressure to achieve good grades, etc.

Below Heidi Heiskanen’s comic ”When sleep doesn’t come...”, in which a young girl thinks about her home work, friends, money, pet, sisters and school tests, so that she is wide awake. She writes an entry in her diary, which calms her down and she goes to sleep. 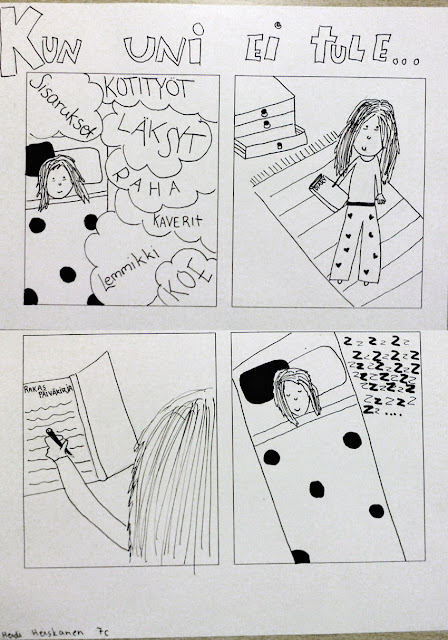 Posted by World Comics Finland at 18:49 No comments: