I happened to come across a  very nice comic in the web describing a grassroots comics training workshop, organised by the African Movement of Working Children and Youth (AMWCY) in Bamako, Mali.


Alhassane Diarra of AMWCY’s branch in Segou, Mali, had made the comic which vividly captures the positive atmosphere of the workshop.

AMWCY has a website www.maejt.org  with sections in French, English and Portuguese. The following links include comics: 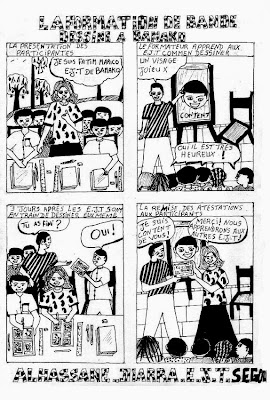 Title: Comics training in  Bamako. First panel:  The participants introduce themselves. Second panel: A drawing exercise in making expressions. Third panel: In three days  all participants have finished their comics. Last panel: The certificates are given out and one of the the participants says that they will teach other AMWCY members how to make comics.

Posted by World Comics Finland at 09:10