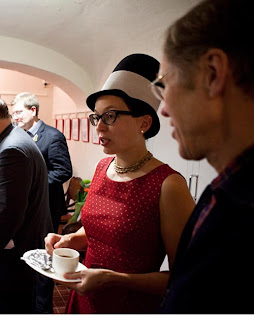 We congratulate Comics Artist Kaisa Leka who was yesterday awarded this year’s Puupäähattu prize. It is a prestigious, annual prize awarded by the Finnish Comics Society to an accomplished Finnish comics artist. The prize was named after the hat of of Ola Fogelberg’s classic character Pekka Puupää.

Kaisa Leka is a member of World Comics Finland. She took part in the  Rajasthan workshop in India in 2009 as a trainer (see report:  http://www.worldcomics.fi/pdf/report-october-2009-rajasthan.pdf). She has her own blog as well:   http://kaisaleka.blogspot.com/

Other members of World Comics Finland who have received the Puupäähattu prize are: Tarmo Koivisto (1978), Matti Hagelberg (1997), and Katja Tukianen (2003). We will return to them in another blog posting.

We are proud to note that so many of our members have received the Puupäähattu Award. They have combined extraordinary talent and wit with commitment and vision.  L.P

Posted by World Comics Finland at 19:07