On 18-20 September, 150 Palestinian refugees from Nahr el-Bared camp (NBC), North Lebanon, staged a sit-in and erected tents in front of the Lebanon Field Office, Beirut. They protested against the cuts in UNRWA Emergency Program for NBC.

The whole NBC was destroyed in 2007 in the fighting of Lebanese army and Fatah al Islam fighters. Over 30 000 camp residents escaped. The reconstruction of the camp is slow. Most of the displaced refugees are still waiting their return to NBC in temporary shelters around the construction site or in other camps. In this precarious situation they cannot accept the cuts of the Emergency plan of UNRWA. They need education for their children, social work, healthcare, decent housing and cultural services like all families in the world.

World Comics Finland organized with Psychologists for Social Responsibility (FiPSR) in 2005 and 2007 training courses for the young activists of Palestinian refugee camps in Lebanon. Ministry for Foreign Affairs of Finland supported the training. The working tool of grassroots comics for campaigns was very well received amongst the young activists.

(All photographs by Sirkku Kivistö)

Posted by World Comics Finland at 13:10 No comments: Links to this post

I happened to come across a  very nice comic in the web describing a grassroots comics training workshop, organised by the African Movement of Working Children and Youth (AMWCY) in Bamako, Mali.


Alhassane Diarra of AMWCY’s branch in Segou, Mali, had made the comic which vividly captures the positive atmosphere of the workshop.

AMWCY has a website www.maejt.org  with sections in French, English and Portuguese. The following links include comics: Title: Comics training in  Bamako. First panel:  The participants introduce themselves. Second panel: A drawing exercise in making expressions. Third panel: In three days  all participants have finished their comics. Last panel: The certificates are given out and one of the the participants says that they will teach other AMWCY members how to make comics.

Posted by World Comics Finland at 09:10 No comments: Links to this post


René Claude Niyonkuru from L’Association pour la Paix et les Droits de l’Homme (APDH)  in Burundi attended a human rights seminar in Helsinki in September and showed us some new grassroots comics. These very vivid and accomplished comics are used in village meetings in Northern Burundi in APDH's activities aimed at community awareness. Samples of the comics are shown below.

During René Claude's brief visit we also had discussions on how to continue our cooperation project in Burundi. APDH would like us to train more comics trainers as the grassroots comics idea has been received with a lot of enthusiasm in their network. Finding funding for such training and its related activities is the problem. Development cooperation funding is going down, and big and established NGOs seem to take an increasing share of available money. 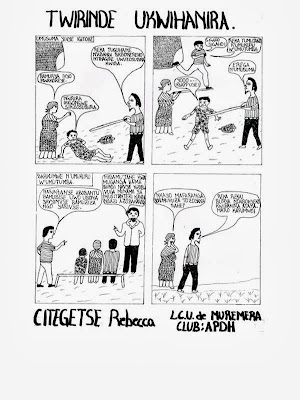 Summary: A couple beats up a thief after catching him red-handed. Neighbours intervene to calm down the situation. Later, the village council orders the couple to pay for medical care of the thief and they also risk serious penalties. When going home they deeply regret beating up the thief. Comic by Rebecca Citegetse of ADPH, Muremera.

Posted by World Comics Finland at 10:31 No comments: Links to this post