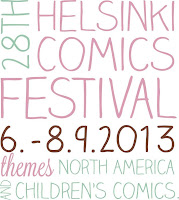 Posted by World Comics Finland at 10:48 No comments:

(Short summary in English below)

Summary in English: Tarja Nieminen is a student of Applied Arts who used grassroots comics as a practical assignment in her studies. She had no previous comics training, but downloaded the manuals which are available on our website and her four workshops for children and youths (ages 6 - 15) went well.

Posted by World Comics Finland at 15:01 No comments:


Paul "Maddo" Kelemba has recently compiled a book of his popular "It's a MADD MADD World" composite cartoons, which appear each Saturday in the Standard. The book covers the tumultuous years 2007 -2011.  The hefty volume has about 270 pages, and it is available on amazon.com and in a few bookshops in Nairobi. For anyone interested in a lighter commentary on Kenyan society the book is a must-read. Maddo has both insight and cheek, and he is much loved by his readers.

- In the recent years we have had several dramatic events and a lot has been happening (the 2007 presidential campaign, the election results, the unrest that followed, the shaky coalition government, a new constitution, the scramble for 2012 polls, etc.). The publishers wanted to get this off the presses first, but don't worry, the 1989 - 2000 and 2000 - 2006 compilations are on their way.

Describe your work process with the weekly page.

- Well, "It's a MADD MADD World" is a full page, so quite a lot of work, but on the other hand I really enjoy all the space. Mondays and Tuesdays I normally dedicate for other jobs, but on Wednesday I start in earnest. All the time I take notes, which I store in my telephone. Wednesdays I take everything into the computer and start to rewrite the notes into text balloons and text boxes. Then I do rough sketching until I'm reasonably happy with the overall content. On Thursdays, I do final sketches and inking, scan and edit the material in Photoshop, then combine everything in InDesign and send if off (usually late into the night) to the editor.

How have you adapted to all this computer work - after all you started your career with ink drawings?

- Yes, there is no denying we can do amazing things with a computer, however, I feel I work longer hours now. Perhaps I'm just getting slower at 50 (laughter). Each time there is a new version of Photoshop or InDesign, it worries me a little. Illustrator is something I have avoided to use altogether.  But I'm comfortable using the basic programs. In a project I wanted to try video editing but I realized quickly it's a waste of time to try to master everything yourself.

When it comes to press freedom, how is it affecting your work?

- I feel I have total freedom to take up whatever I want, but of course I am experienced and understand the limits the editors face. I feel the limits are more on the written word, we cartoonists can usually get away with much more.

It's a MADD MADD World has been featured since 1989, first as a 9 cm strip over three tabloid columns, then as half page in 1990, and in a full page in 1998, and it has been published in colour since 2001. it must be considered a huge success, can you say why?

- The page is about local issues and local people. One must know the local scene in order to appreciate the humour or satire. But it has grown in popularity tremendously, when I started I had no idea where it would go eventually. I was lucky to have clever editors, who asked me to do a composite feature at the time. Every cartoonist should have a friendly editor, who says ok at the right time. The composite page format caught on elsewhere too, e.g. Gayo made a half page (Huu ni Mjini) in Tanzania, and I have followers also in Uganda and Rwanda.

In your early career you made comics, cartoons and illustrations like most multipurpose artists. Has that changed now?

- Illustrations I don't do any longer. I have made a lot of them before. In the beginning, I considered comics being my strongest work, but I was forced to make cartoons as that's where the market was. In comics, my action hero was called Miguel Sede, a crimebuster in one action-packed adventure after the other. I started it for the Coast Weekly in Mombasa in 1981 and it has been published in several papers, unfortunately never in book form, as a lot of the original drawings was accidentally lost.  I moved to Nairobi in 1984, where I also made a strip called TAGA - the terrible Turkana.

Have you always worked free-lance?

Your team has had a long cooperation with UNFPA (United Nations Population Fund), which is based in Nairobi. How do you look at thematic assignments?

- We have made for UNFPA an annual publication with stories, cartoons, and facts about issues related to population, gender, sex, etc. The magazine is called Pop-Ed, it has about 50 pages and has become very popular. It is distributed in many African countries. I edited the first 11 publications, but have now handed over that job. The work with UNFPA has been an eye-opener for me, I have learned a lot of new things about adolescents, FGM, polygamy and other gender issues. The stories are always well researched and the messages in them carefully considered.

It is quite time-consuming to work with these UNFPA assignments, but it is also rewarding to see a good end-product. We have also been thinking of making some stories available as Flash-animations.

You are also involved in music promotion, can you say something about that?

- I am Chairman for an NGO called Ketebul Music, which has the mission to document Kenyan traditional music and join that with contemporary artists. We do recordings, concerts, research, etc. We are also planning to make dramatized video documentaries, perhaps this can be called docufiction? Music has been a long-time interest with me.

What do you think of the future of political cartoons in the current press climate?

- The impact of editorial cartoons has fallen over the years, now it is the political satire on TV, such as XYZ (a highly popular weekly TV-show in Kenya), which is more important. Previously, editorial cartoons were occasionally featured, but now they have become permanent parts of the papers, and more mainstream.  I'm also involved as a creative adviser with Buni Media, the group that produces XYZ. As an overall observation I would say that websites loose out to social media, which most people access on their phones. It seems that I will also myself have to increase my activity on Facebook and Twitter.

(The interview was made in March 2013 in Nairobi)

Paul "Maddo" Kelemba was born in Nairobi, Kenya, and lives with his wife and three children in the capital. His base is the 4D Innovative Studio, which he shares with his colleagues Gado and Kham.

Posted by World Comics Finland at 09:02 No comments: