Migration and xenophobia have become major issues in Europe in the last years. In Sweden there are several groups and artists who use comics as a central tool in this debate.

Tusen serier with comics activists Amanda Casanellas and Mattias Elftorp is a group within the Swedish Comics Association. They broaden the Swedish comics scene with artists of migrant background, and publish graphic novels on the theme of migration. They have published several titles both by immigrant comics creators and Swedish artists.
Check out their excellent website: http://tusenserier.com/index-e.html

Serier mot rasism (comics against racism) is an anthology edited by four students at the Comics School in Malmö in 2011. It has 140 pages with comics by 34 artists. The publisher is Optimal. The proceeds of this books go to a network called “Ingen människa är illegal” (no human being is illegal), which supports among other things, paperless migrants in Sweden.

Henri Gylander http://www.henrigylander.com/
Henri Gylander is - besides being a prolific comics artist - an asylum activist. Below is a detail from a four-page comic, published in Asylfanzine by the campaign Asylrätt (Right to Asylum) and in “Komika Antologi #1”. It has also been published in Finnish in the magazine “Voima” 10/2014. He is bilingual in Finnish/Swedish and lives in Gothenburg.
Kudos to you, Sweden!

Posted by World Comics Finland at 17:49 No comments:

Soufenia “Tuffix”  Hamed (24) was born in Tunisia, but has grown up and studied in Germany. She is a devout Muslim and her works are much about being a Muslim in Europe. She publishes a lot of her works on the Deviantart-site and has quite a following there. Deviantart.com is an online gallery and social forum for artists of all kinds.

Her profile can be found on this link: http://tuffix.deviantart.com

Soufeina has posted almost 300 pictures and comics on the site during the 5 years she has been a member there. Her works have created a lot of comments (about 6000!) and her pages have been viewed almost 90.000 times. This are very impressive numbers.

Soufeina engages in a very active exchange with persons who comment on her works. She receives some negative comments as well, mainly regarding Islam, but she answers them with precise and disarmingly honest replies. Her hatemailers run out of steam quickly. She is a great asset for creating intercultural understanding in Europe, something which is much needed in these times.

Soufeina also makes sketches when she travels. Check them on her Deviantart Gallery -page under “Travel sketches”.  She has been to Bosnia, Turkey, Mecca, etc. Below one sketch from her trip to Paris. 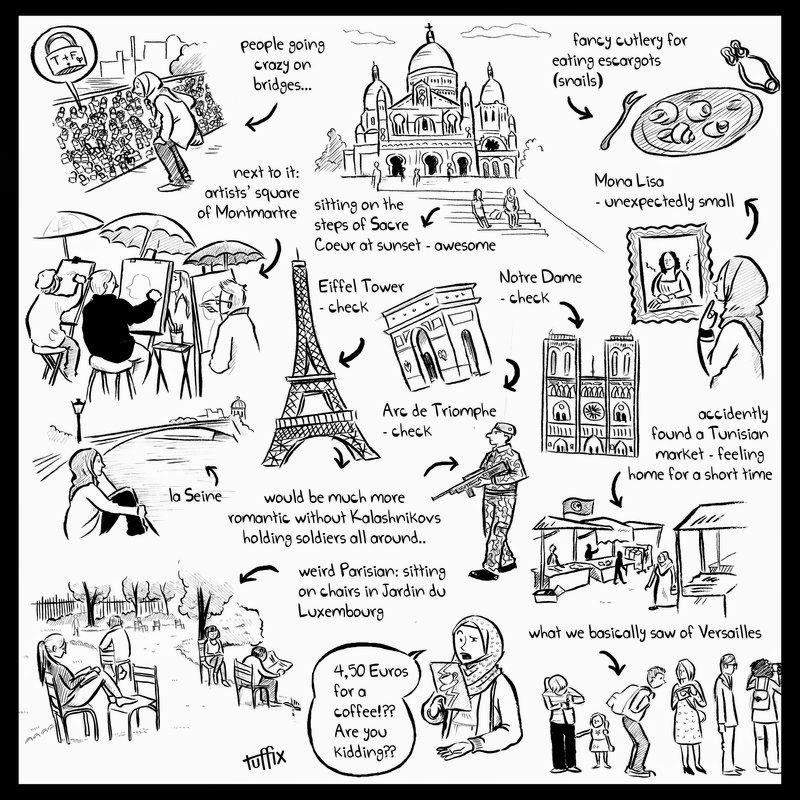 Soufeina has had some well-received exhibitions in Germany (do a search on Youtube). I would love to see an exhibition of her works also sometime here in Finland. Her works radiate poised calm and joyfulness.

Posted by World Comics Finland at 10:25 No comments: