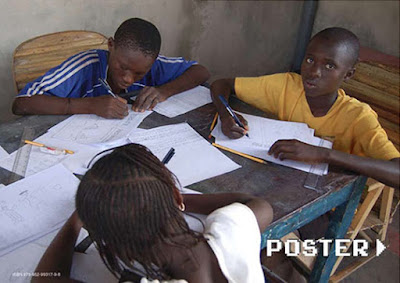 Finnish artist, Kaija Papu, went to Senegal in 2008 to run a workshop at the Finnish–Senegalese cultural center, Sunu Kër, in Dakar. The idea was to make comics about issues important to the young participants, who were from the neighbourhood.

Kaija Papu compiled the comics in a small booklet called “PosterPlay”. The book, with texts in French and English, is available in print from Kaino-kustanne and online as a PDF-file.

We found out about the book only recently, but think it is definitively something to share.
Posted by World Comics Finland at 17:49