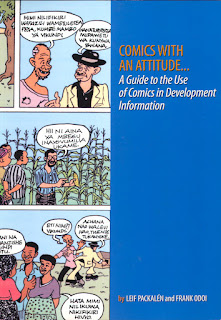 The Ministry for Foreign Affairs of Finland published in 1999 the guide book "Comics with an attitude…" on how to use comics in development information work. It was written by Leif Packalen and Frank Odoi and it was directed to NGOs as a guide on how to produce comics in different campaigns. The book was very popular, and it was distributed free of charge by the Ministry (eight printings, 14000 copies).

We still get requests for the book, which is a hands-on guide and has a lot of interesting campaign comics samples from different parts of the world. The basic information in it is still valid and it is quoted frequently in various articles discussing the role of comics in development and human rights work. A recent example is Ellen and David Yamshon's  Comics Media in Conflict Resolution Programs:  ARE THEY EFFECTIVE IN PROMOTING AND SUSTAINING PEACE? (published in the Harward Negotiation Law Review. )
The book is out of print, but we still have a few hard copies if there is an organization that would need it. It is also available in electronic form in four chapters at the Ministry's website.  The links are below: